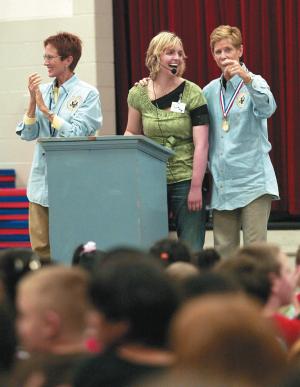 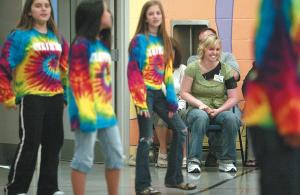 (Above) Rachel Barezinsky, center, stands in front of students at Slate Hill Elementary with retired sixth-grade teacher Leslie Main, left, and guidance counselor Kathy Moore following a speech Barezinsky gave to students about character during an assembly at the school on May 9. Barezinsky visited the school she graduated from to talk about her life before and after being shot in the head and shoulder. She spoke to the students about character traits that have helped her through rehabilitation. She received an award from Moore for being an individual who exemplifies a person of good character.

(At right) Barezinsky watches as the Word of the Month team performs during the assembly.

"Diligence" and "commitment" were the words of the month celebrated at a school-wide assembly at Slate Hill Elementary School last Friday, and the speaker was a shining example of both.

Rachel Barezinsky, the Worthington teenager who was critically wounded by gunshots fired as she and friends were "ghost hunting" at Walnut Grove Cemetery and at a house adjacent in August 2006, commanded the young students' attention as she described her struggle to recover over the past 21 months.

"I was shot in the head and shoulder and the doctors told my family I would not survive the night, and if I did, I would never be myself again," she said.

She did indeed survive, but spent months recovering at Children's Hospital, and continues daily physical, occupational and speech therapy, both at the hospital and at Thomas Worthington High School.

She said that she works daily to overcome the effects of the injuries that she suffered just days before she was to begin her senior year at Thomas Worthington High School, where she was a cheerleader.

And while she may never again match the kind of agility shown by the peppy Slate Hill word-of-the-month team that opened the assembly last week, she was able to walk steadily to the front of the gymnasium at her former elementary school, and she delivered her inspirational message with clarity and humor.

"Always stay positive about everything," Barezinsky told the youngsters. "I will always be a Slate Hill Star."

She still attends Thomas Worthington, where she is finishing up the credits she needs and is able to take advantage of the school district's services. In the morning, she studies early childhood education at the Delaware Career Center.

Afternoons are spent at Thomas, where she receives speech therapy that focuses on strengthening the memory that was lost as a result of her injuries.

"My short-term memory is a real challenge, but I am improving every day," she said. "I keep pushing myself 110 percent every day."

Through physical therapy, Barezinsky is strengthening her left shoulder and leg. She wears braces on both, and walks with a cane.

She explained to the students that when one side of the brain is injured, it affects the functions on the opposite side of the body.

One of her more recent challenges was to watch her friends go off to college this year, she said.

And though she appreciates all that her family and friends do to support her, it is also sometimes trying to never be without adult supervision, she said.

Her parents help her get ready for school each day. An aide is with her at school. After school, she stays with a neighbor.

"People just want to help me, though at times it seems like they are babying me," she said.

Through her ordeal, though, she has also learned the value of her family, friends and teachers, Barezinsky told the students.

"Work hard because you will do better, and you are important to your family and your teachers," she said.

Slate Hill guidance counselor Kathy Moore said that even as an elementary school student, Barezinsky was a positive role model for other students.

Moore was one of the earliest supporters of character education in the Worthington Schools, and Slate Hill has always observed and celebrated the word of the month, which encourages students and community members to think about and practice a different character trait each month.

Last week's program opened with a performance by the word-of-the-month team, a group of students who dance, sing and gymnastically perform messages about the traits being promoted. Moore also handed out awards to students who demonstrated the kind of character strength that is encouraged at Slate Hill.

But it was the words of Barezinsky that made a lasting impression, she said.

"When I watched your faces, I knew you were going to remember this day and what she had to say," Moore told the students.

Another Step for Cheerleader
8172 views - 0 comments